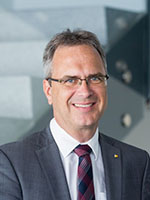 Dr. Peter Riedler,
Rector
Peter Riedler, born in Graz in 1969, received his doctorate in international law and European law from the University of Graz. His professional career path has taken him to the European Parliament in Brussels; the Styrian State Government; the Federal Chancellery in 2002, where he focused on business and research; and to AVL List GmbH in Graz in 2007 as the Director of Public Affairs. In 2011 Riedler became vice rector, in December 2021 acting rector of the University of Graz. Since October 2022 he is Rector.