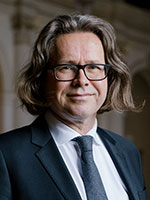 Martin Polaschek was born in 1965 in Bruck an der Mur. After completing his studies in law, he obtained his habilitation qualification in 2000 in the areas of Austrian and European legal developments, contemporary legal history and federalism research and was then appointed as an associate university professor. From 2003 to 2019, he served as the Vice-Rector for Studies and Teaching and Director of Studies at the University of Graz. In addition, Mr. Polaschek acted as the spokesman for the Austrian vice-rectors for teaching. Martin Polaschek also remains active in research. His academic focus is in the areas of post-war justice, university law and municipal research.